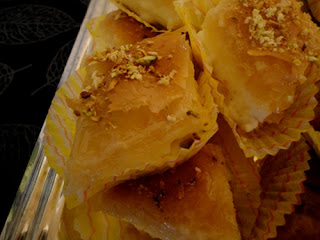 This makes a lovely change from the usual  Baklawa with nuts, with a much lighter taste making it perfect for Ramadan.

The filling of the Levantine recipe is an Arabic dessert cheese called Jibn Akawi, but in Libya we use a rosewater flavored muhallabia with some cream cheese mixed in.

The syrup poured over the cheese baklawa adds a taste of honey and more rosewater, making this a delicate dessert that does not lack in flavor. 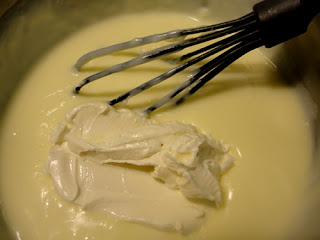 Pour 600 ml milk in a heavy-bottomed pan and bring to the boil with the sugar, meanwhile dissolve the cornflour in the remaining 200 ml milk. Pour the cornflour into the hot milk and whisk briskly, when a thick custard forms cook for a further 5 minutes then turn off the heat and mix in the cheese, rosewater and cream. 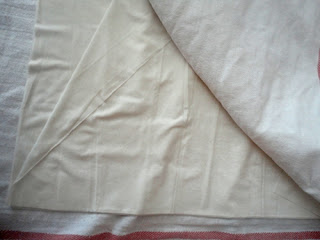 Divide the phyllo in half, cover with a slightly damp kitchen towel. Melt the clarified and then mix it with sunflower oil for brushing. 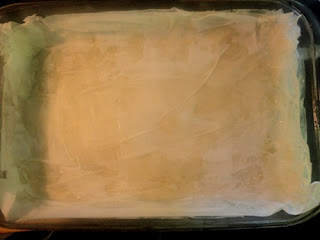 Use a pastry brush to grease an ovenproof dish (around 20 x 30 cm) with the butter and oil mixture. Raise the phyllo over the edges of the dish like the sides of a pie (you may need to use 2 sheets per layer and trim the excess). Brush just a little oil and clarified between each layer phyllo pastry. 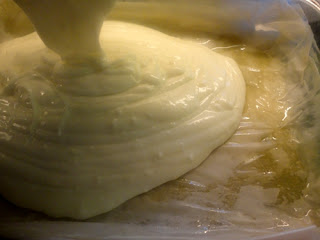 Once you have used half the phyllo or about 10 sheets, pour the cooled cheese filling onto the last layer of phyllo. Wait for the filling to set, then place a phyllo sheet on top, brush with butter and oil then add another sheet of phyllo and continue until the top layer of around 10 sheets is complete. 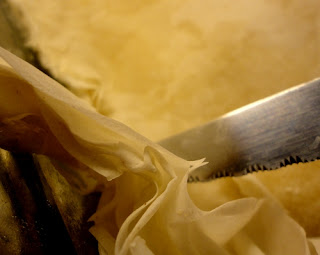 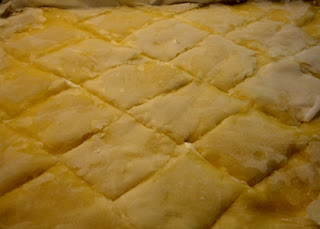 Carefully cut the uncooked balklawa into diamond shapes by scoring diagonal lines. Don’t press down to the bottom layer or the filling will be squeezed out. 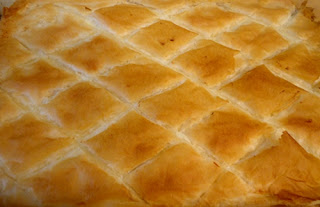 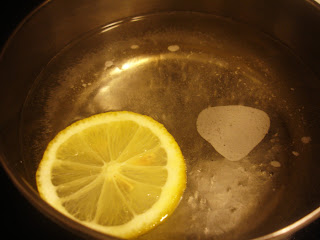 Boil the sugar, water and lemon slice together when they reach a syrupy consistency cook for a  further 5 minutes. Add rosewater and a spoonful of honey then turn off the heat. 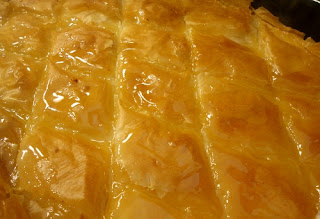 Once the baklawa has cooled pour the syrup along the lines you scored, just as much as the phyllo absorbs. Too much syrup is overpowering and spoils the texture. 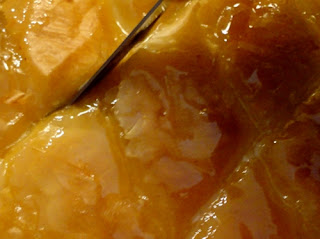 Ideally wait for 6 hours before cutting and serving the cheese baklava. 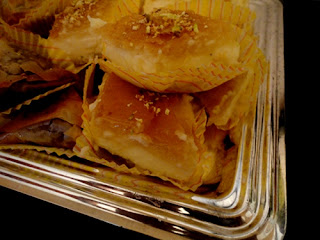 Remove the baklawa pieces from the dish, the sprinkle some finely chopped or grated pistachio in the center of each diamond.